Welcome to tomorrow, today. This new decade takes us beyond ‘Blade Runner’, meaning we can thankful the apocalyptic predictions of countless sci-fi classics now set in the past have been avoided. So far at least. Nevertheless, the 2020s have landed with a distinctly dystopian vibe, and the planet seems to be burning wherever you look.

Not just a reference to swathes of the Amazon left in ashes and uncontrollable blazes on the world’s biggest island, kleptocratic decisions are omnipresent. We can ill-afford this fire sale of resources, where quick profits are valued over people regardless of the real cost. Yet it continues at an unprecedented rate.

On 23rd January the Doomsday Clock moved forward, with Armageddon’s timekeepers setting hands at 100 seconds to midnight. At 12AM all is lost. The catastrophic chronograph is closer than ever to the end of days, so it’s easy to believe the only reason we can’t hear a bell beginning to toll is because Boris Johnson didn’t get enough bobs to make Big Ben bong for Brexit.

You’d be right to feel disheartened. But when hope dies so do our chances to enact positive change. The fat lady may have finished clearing her throat, but that final, shrill serenade is still avoidable. Bleak odds have been overcome before, with resilience often found in the most beautiful aspects of human nature.

An inherently creative species, despite our appetite for destruction, the arts consistently provide platforms to raise awareness and fuel resistance. This series will look at inspiring initiatives embodying that idea — places where people are producing nice things for crucial causes with the intention of waking us from living nightmares.

I first met Julianna Cuervo in spring 2019, while researching an article in Medellin, Colombia. Set against the backdrop of the SIMS Selina Music Summit — born out of the exponential growth of Latin America’s music scene, in particular its increase in global reach — the DJ, producer, promoter and activist is an inspiring individual. One look at Nótt is proof of this, a female collective she co-founded after building a database of South American women working in the music industry across a continent rife with misogyny. 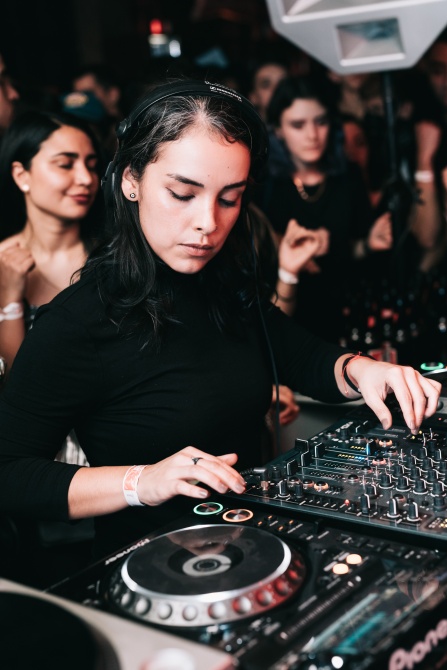 Around that time I received an album, ‘Place: Colombia’; a compilation curated by Cuervo packed with homegrown electronic talent which raised money for Mutante, a non-profit that educates the public on serious social issues. A particularly important effort given media transparency in the country is worse than the UK, which is saying something. We kept in touch, and in December she messaged about a new release.

‘Música Urgente’ packs a whopping 42 tunes onto its track list, ranging from the dark, brooding and industrial-tinged broken techno of Magdelana’s ‘Somos’ to the serene ambience of ‘Sangre Derramada’ by Zemög via death synths and chants on Vástagas’ ‘La Peregrinacón de La Bestia’. This time revenue assists the ongoing protest movement in Colombia, largely centred on Bogota, where thousands have been marching for months in opposition to right wing President Iván Duque Márquez. Hence the title’s ‘urgency’.

“They are taking place for several reasons,” Cuervo says of the demonstrations when we speak over the phone, before listing a painfully uneven society, widespread corruption and corporate colonialism. Poor investment for essential services is also a major concern, disproportionately impacting the poorest in a county where the average income is $692 (US) per month, as are renewed threats to the nation’s stability.

We joined the students who have been protesting for almost five years now because the current government is still not respecting the budget for education. And now a lot of things changed in the new government, for the worse, especially respect for the peace agreement with FARC,” she explains.

War has been a reality in Colombia for too long, and this history is incredibly complex. After a period of political fighting known as la violencia communist guerrilla groups, excluded from a power sharing agreement, took arms in the mid-1960s. Their aims included the promotion of agrarian and anti-imperialist ideologies, their enemies successive administrations sympathetic to US and western interests. The largest of these forces, FARC, signed a ceasefire with the government in 2016, emerging as a legitimate political party. President Duque, who took office in 2018, opposes the deal. 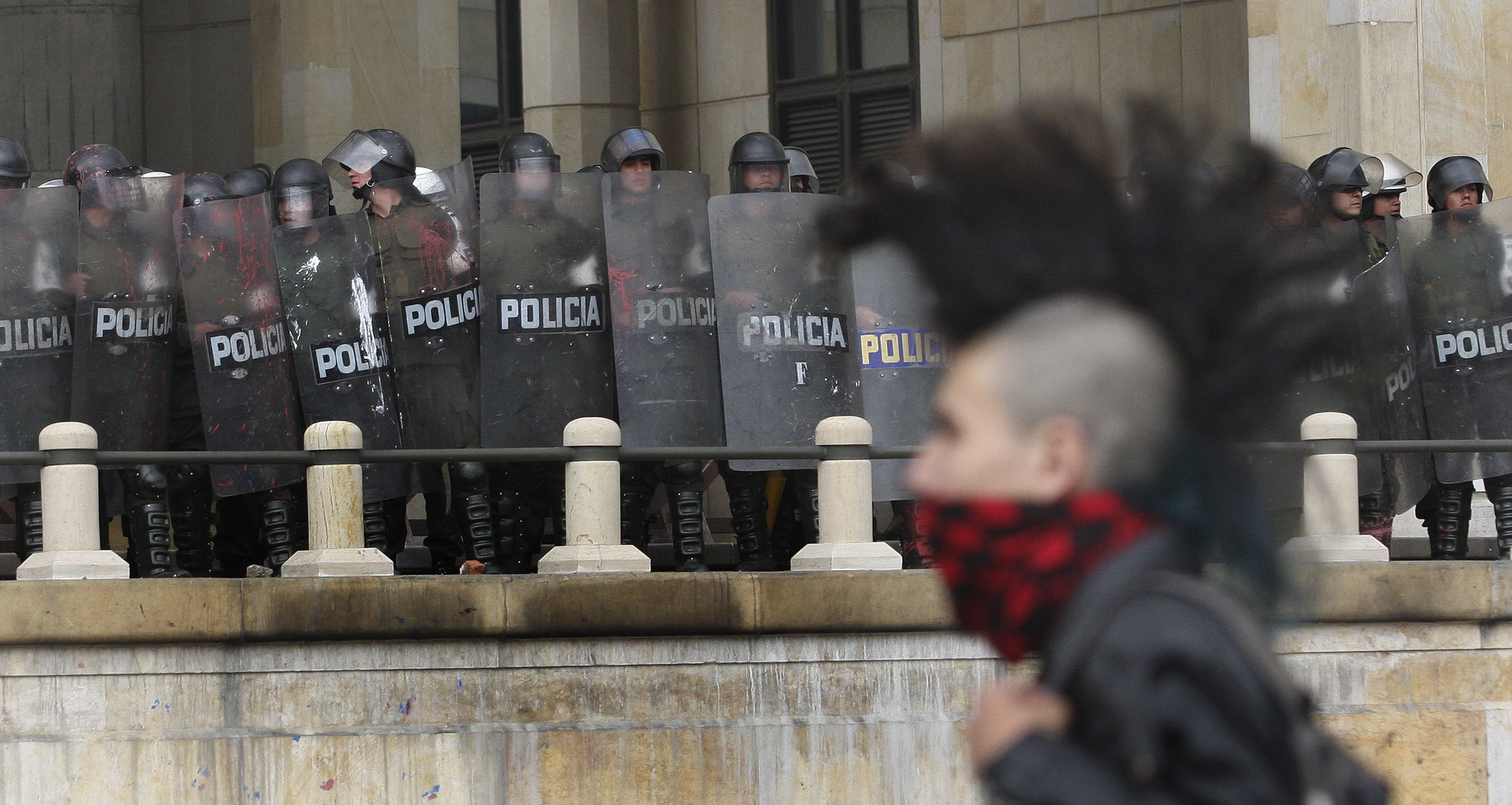 As assassinations of key figureheads from rural demographics have continued the government has been accused of failing on promises to protect this population, breaking terms of the treaty. In August last year, former FARC members announced a ‘new stage of fighting’ as a result. The army has responded, perhaps most horrifically in November when eight children were killed during a state-sanctioned bombing raid, contributing to Defence Minister Guillermo Botero standing down from his post.

“Just this year there has been one [community] leader killed per day. Since the start of 2020. So everybody, especially on the march, is representing the people,” Cuervo tells me of the recent bloodshed. Some believe these deaths can be linked to multinational enterprises looking for increased access to valuable resources.

Either way, innocent people are back on the frontline, caught in the crosshairs. Human and civil rights are being violated, whether through military action or heavy-handed police responses to the urban unrest. At the time of writing, four protestors have lost their lives following clashes with authorities in Bogota.

“The Indigenous Guard are the ones who are suffering the most with the situation,” Cuervo says of the nonviolent force whose job it is to ensure rural South American Indian communities are allowed to live in peace. The organisation will receive proceeds from sales of ‘Música Urgente’ to help fund their work.

“They are super nice, so beautiful, and they have been very brave during this time. Even without resources they have joined the protest in Bogota, travelling to Bogota. So it’s important to give them money to stay in this.”

Colombia is not alone in its struggle. Chile, Ecuador and Bolivia are all currently experiencing comparable movements, with inequality and economic corruption — created internally and externally — key catalysts. Meanwhile, Venezuela has been brought to its knees over the last decade due to similar circumstances. A political pandemic chronicled in part through samples of news reports on the ‘Música Urgente’ track, ‘World Problems’.

“Right now, in this part of the world, not just Colombia but all of Latin America, the people are fighting to be let be, to finally have a voice as a continent,” Cuervo says. “And also fighting against the big enterprises. It’s important for people to understand that.

As people from this area we need to have our own voice,” she continues, before explaining that raising awareness of the situation is a victory in itself. “It’s a struggle but I think the conversation is there and it is being understood more. People are being supportive. But it’s about keeping eyes on here and what is happening, because I don’t know what else people can do.”

‘Musica Urgente’ is released thanks to the combined efforts of Ediciones Éter, Insurgentes, Monofónicos, Move, Nótt, Nutabe, Pildoras Tapes, Rouge Collective and Unknown Collective. It is available to buy now via Bandcamp.